“Too many of us are not living our dreams for we are living our fears instead.” – Les Brown.

Sitting at my desk the week before I left for Nepal, I wrote this quote on the inside of the travel journey I’d be taking. Having never been overseas before, and never anywhere on my own, I thought it would help me if I ever felt worried. Little did I know how apt this would become.

Let me set the scene: It is so cold that it’s impossible to do up my jacket zipper, which is particularly inconvenient, seeing as the wind is piercing. This can probably be attributed to the fact that we’re 160m above the ground. And by ground, I mean a rock-infested white water river. Which we are dangling above, on a hideously thin suspension bridge. By choice. 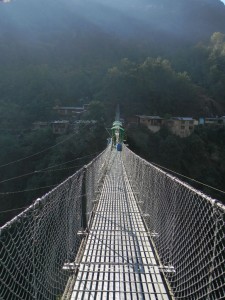 I’ll go back a few days. Seven of us volunteers are crammed into a 4 person taxi, returning from a meeting. We’re chatting about our weekend trip to The Last Resort, an adventure resort near the Tibetan border. Some of the girls have been already, and they’re enthusiastically reliving the experience of bungee jumping and “The Swing”. The others are convinced, and have already signed up to throw themselves off a bridge. I’m comfortable in the knowledge that I despise heights, and have no inclination to test this fact. So I sit quietly, hoping the conversation will move along. But alas, someone asks me whether I’m going to brave either of the torturous activities. And before I know it, all 6 of them are cajoling me, using guilt and encouragement and comfort to convince me to sign up. And the little voice in my head is thinking about that quote in the beginning of my diary. So before I can change my mind, I quickly sign up to do this Swing thing. At least it’s not a bungee jump, I tell myself. At least it’s not a headfirst dive. At least I’m attached by more than just my feet.

And that is how I have come to be standing on a hideous bridge, shaking from the cold (and, let’s be honest, pure unadulterated fear). I’d like to pretend I was extremely brave, that I miraculously overcame all vestiges of fear, and catapulted off without hesitation. But that would be a lie. The question everyone asks is, “Did you scream?”. I didn’t scream – I was too scared to scream. Instead, I let out a pathetic little whimper and closed my eyes all the way down. It wasn’t until I stopped freefalling (seven unbelievably long seconds later) that I opened my eyes, as I swung through the ravine, which from this angle was really very pretty. I clambered out and sat without moving, emotional exhausted, for 15minutes. 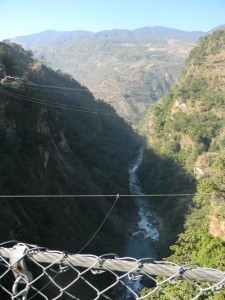 Would I ever do it again? Absolutely not. But, I’m incredibly glad I did. And that’s because, once I’d jumped off a bridge into a ravine, I was brave enough to get into a taxi, trundle up a mountain, and paraglide over the lake in Pokhara, where you get a view of the Himalayas. Which was one of the most amazing things I got the chance to do, it was just absolutely incredible.

Which brings us to the inevitable coda of this tale, so I’ll just put it bluntly. Is it better to cower in fear, and never push beyond our boundaries, and aim for something that doesn’t seem possible, or to nothing but stick with what we know is safe? Maybe our safe zones are a good thing, that it seems like a terrible idea to jump off a bridge, is a positive reflection on our self-preservation instinct. But we don’t want our self-preservation instincts going into overdrive: self-sabotaging is what educationalists call in when we are convinced it’s impossible to succeed, so we don’t even try. If I hadn’t faced The Swing, there would have been no chance I’d have paraglided, and I would have missed out. If you don’t aim high, there’s absolutely no chance you’re going to get there. Sometimes you have to take a leap of faith.